First, second, third and consolation prizes were given to the winners of poetry competition in the hands of the chief guest.

On the occasion of Women’s Day, the Board of Non-Collegiate Women’s Education, University of Delhi and Educational Foundation organized a program on Monday. In which the Vice Chancellor of Delhi University, Prof. While welcoming everyone, Yogesh Singh inspired all the students to move forward with positive energy. Chief guest Rekha Sharma talked about equality of women in the society. The program was started by worshiping Maa Saraswati and lighting the lamp by Prof. Geeta Bhatt, Director of NC Web and Dr. Umashankar, Deputy Director. 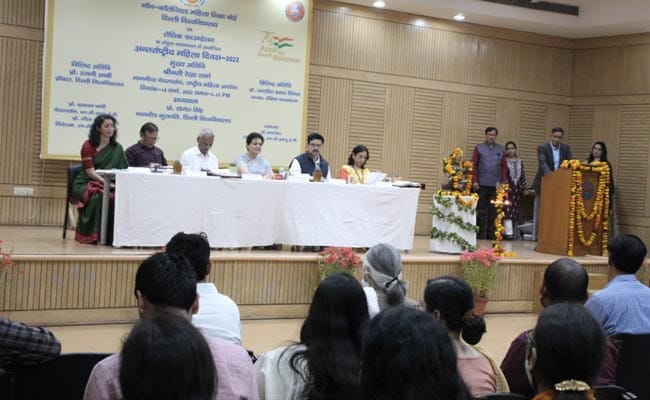 In the first phase, a poetry recitation competition was organized by the girls on the topic “Role of Mother Power in the Light of Freedom Movement”, in which a total of 42 girls participated. After this, in the second session, Rekha Sharma, Chairperson National Commission for Women remained as the chief guest. He talked about women’s rights and things related to them. On the other hand, as a special guest, Prof. Jagdish Prasad Singhal, President, Educational Foundation talked about the empowerment of the society due to the empowerment of women.

The Vice Chancellor of Delhi University, Professor Yogesh Singh, while giving a powerful statement, took a pledge to remain positive, believe in himself and not do any work against the country. Prof. Balram Pani, Chairperson, NCWeb spoke about the complete journey of NCWeb so far. Prof. Ranjit Abbi, Proctor, University of Delhi mentioned the situation of women in lockdown. He said that during this time women were double burdened but they fulfilled both the responsibilities well while working from home and doing household chores.

In the end, first, second, third and consolation prizes were given to the winners of poetry competition in the hands of the chief guest. Dr. Umashankar was conducting the efficient stage of all the sessions. Prof Geeta Bhatt proposed the vote of thanks at the end.

On Women’s Day, Railways ran a train with only women employees

Power supply to metro trains, hospitals may be disrupted due to shortage of coal:...

Teachers Special Train between Mumbai and Banaras by Central Rail