htnewz
HomeGlobalWeather in the last days of 2021: ice on the roads and...

Today, December 30, in most regions of Ukraine, it will be icy on the roads, but significant precipitation is not expected. Forecasters forecast snow, sleet and snow and rain all over the country tomorrow. This was reported by the Ukrhydrometeorological Center.

In the afternoon of December 30, the weather in Ukraine is expected to be from 1 to 6 degrees below zero, in the western regions – from 0 to +5 degrees.

In the Nikolaev and Donetsk regions today there will be heavy ice, in connection with which the second level of danger (orange) has been declared.

Forecasters also warn about ice on the roads of the Kiev region – the first hazard level (yellow) has been declared. During the day in the capital, it is expected from -1 to -3 degrees, and in the region the temperature can drop to -6 degrees. 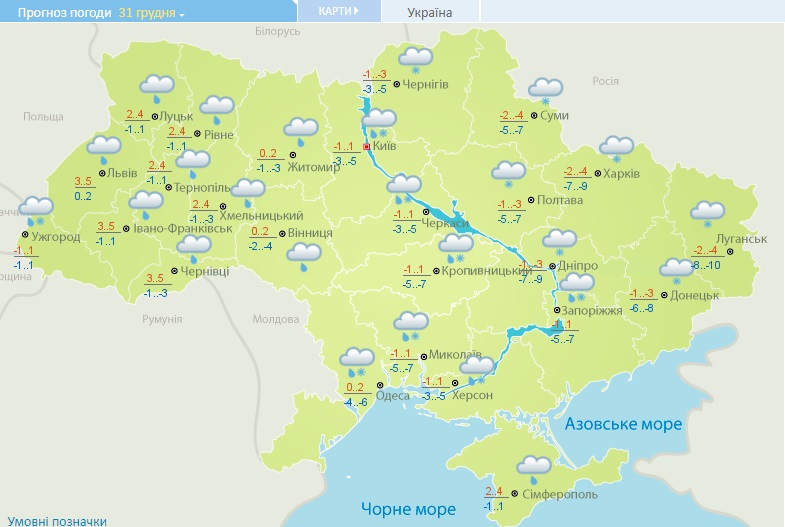 See also: We failed. The climate on Earth will become much worse: this is what awaits us all

If you notice a spelling mistake, select it with the mouse and press Ctrl + Enter.

Share
Facebook
Twitter
Pinterest
WhatsApp
Previous articleHome Remedies For Gas: 6 Amazing And Easy Home Remedies To Get Rid Of Stomach Gas And Bloating, Get Instant Relief
Next articleZakharova linked the escalation of tensions in Europe with the EU-Ukraine Association and the creation of the Eastern Partnership

King Charles III will be crowned on June 3 next year in London.

The meteorite exploded by NASA’s spacecraft was scattered for 10,000 kilometers in space, see...